Vedic Astronomy has a long history stretching from ancient to modern times. Some of the original roots of “Vedic Astronomy” can be dated to the age of Indus Valley Civilization or earlier. Vedic Astronomy later developed as a discipline of “VEDANGA” or one of the “Auxiliary Disciplines” associated with the study of the Vedas, dating 1500 BCE or older. The oldest known text is the “VEDANGA JYOTISHA”, dated to 1400–1200 BCE.

Vedic Astronomical literature emerged namely the Siddhantas. The word ‘SIDDHANTA‘ has the connotation of an established theory. These Siddhanta texts contain much more material and topics than the JYOTISHYA. Jyotishya or Jyotisha (Jyóti– “Light, Heavenly Body“) is the ancient Indian system of astrology, also known as Hindu astrology, and more recently “Vedic Astrology”. The term Vedic Astrology has been in use as the English comparable of Jyotiṣa since the early 19th century,

Jyotishya should involve the plants and constellations, Jyothish also often resort to three allied, non-celestial disciplines: SANKHYA SHASTRA (Numerology), SAMUDIKA SHASTRA (Divination through Interpretation of Body Parts, Using their Shapes, Relative Size and Markings), and HASTA SAMUDRIKA SHASTRA (Palmistry, A specialized branch of Samudrika Shastra). It is not unusual for Jyothish to predict travel only from the plan of the hand, forecast a career change based on the numerology of birth date or predict martial success from the size of toe. The Chief styles of Jyotish are: Nadi Jyotish (Bhrigu Nadi, Parashara Nadi, Shuka Nadi and Chandra Nadi), Parashara Jyotish, Jaimini Jyotish, Tantric Jyotish and Tajika Jyotish. 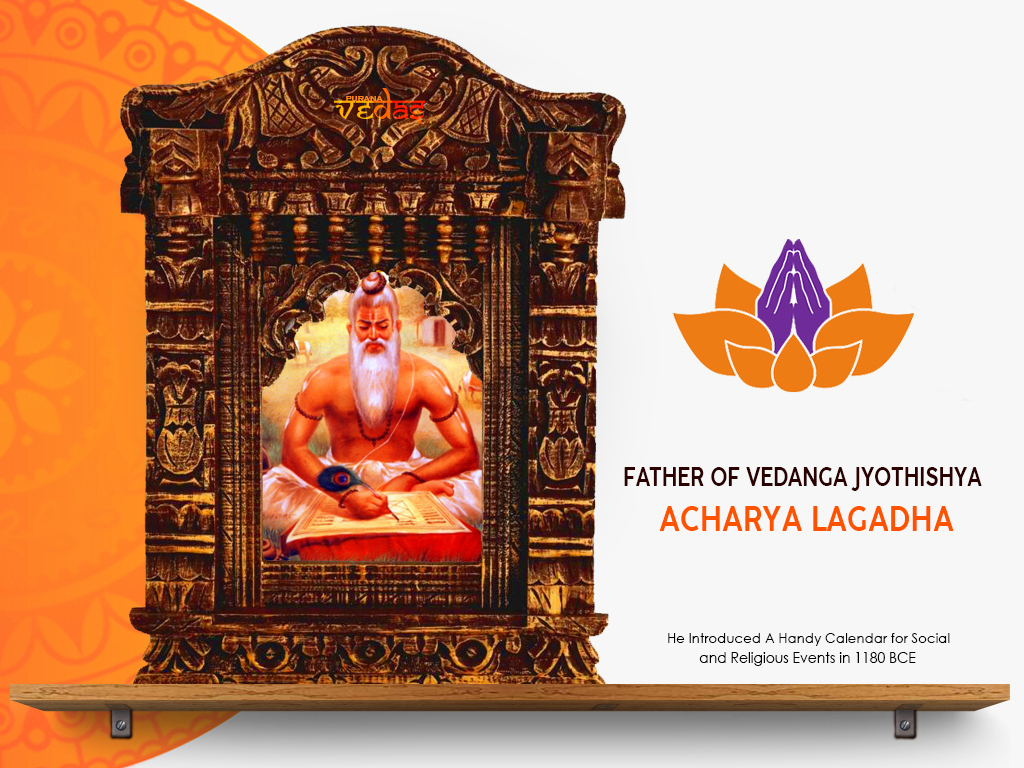 Acharya  Lagadha is The Author of “Vedanga Jyothishya” is highly significant in the history of science in Vedas, in the sense that it is the earliest full-fledged treatise on Indian astronomy As an adjunct to the Vedic lore, it forms a manual for the determination of rituals an sacrifices by the Vedic priest and for the preparation of a handy calendar for social and religious events. The work is current in two recensions, one in 36 verses relate to the Rigveda and the other in 43 verses related to the Yaiurveda, most of the verse in the two texts being common.

Vedanga Jyothishya ‘The Astronomical Auxiliary Of The Vedas‘, of which a critical edition with translation and detailed exposition is being issued through this publication, is the earliest Vedic Jyothish text devoted exclusively to the treatment of astronomy . The work is traced back to the teachings of Maharshi Lagadha (c. 1180 B. c.) and is current in two recensions exhibiting but minor differences, one pertaining to the Rigveda and the other to the Yajurveda called, respectively, Arca Jyotisa and Yajusa Jyotisa.

Vednga Juotisha purely concentrated on The “Kaala-Nirnaya”.  Lagadha Maharshi Formulated the present system of Vedanga-Jyothisha in 8,000 Slokas. He says that Jyotisha is for performain Yagna-Yaagas, The fruitfulness of which will be welfare of whole society. In Yaagas, the Accurancy of Mantra-Prayoga Depends on the Khagola –Kirana, This in turn requires perfect time slice desiend according to Mantra Kaala Nirmaya Sutras. In spite of all steps of Vedanga Jyothisha have been followed. If a mantra does not give results, than it says that there is a mistake in Mantra. So proceed towards “Mantra Prishkarana”. Therefore, Jyotisha is one of the six main parts of testing the Vedas.

Acharya Varahamihir was an Indian astronomer, mathematician, and astrologer who lived in UJJAIN. He was born in AVANTI region, roughly corresponding to modern-day MALWA, to ADITYADASA, who was himself an astronomer. According to one of his own works, he was educated at KAPITTHAKA.

He was renowned astrologer and astronomer who honored with a special decoration and status as one of the nine gems in the court of King VIKRAMADITYA in Avanti (Ujjain). Varahamihir’s book “PANCHSIDDHANT” holds a prominent place in the realm of astronomy. He notes that the moon and planets are lustrous not because of their own light but due to sunlight. In the “BRUHAD SAMHITA” and “Bruhad Jatak,” he has revealed his discoveries in the domains of geography, constellation, science, botany and animal science. In his treatise on botanical science, Varamihir presents cures for various diseases afflicting plants and trees. The rishi-scientist survives through his unique contributions to the science of astrology and astronomy. “He was the first one to mention in his work PANCHA SIDDHANTIKA that the AYANAMSA, or the shifting of the equinox is 50.32 seconds”.

Varahamihira’s main work is the book Pañcasiddhāntikā (or Pancha-Siddhantika, “[Treatise] on the Five [Astronomical] Canons) dated ca. 575 CE gives us information about older Indian texts which are now lost. The work is a treatise on mathematical astronomy and it summarises five earlier astronomical treatises, namely the Surya Siddhanta, Romaka Siddhanta, Paulisa Siddhanta, Vasishtha Siddhanta and Paitamaha Siddhantas. It is a compendium of Vedanga Jyotisha as well as Hellenistic astronomy (including Greek, Egyptian and Roman elements).He was the first one to mention in his work Pancha Siddhantika that the ayanamsa, or the shifting of the equinox is 50.32 seconds.

Varahamihira’s other most important contribution is the encyclopedic Brihat-Samhita. It covers wide ranging subjects of human interest, including astrology, planetary movements, eclipses, rainfall, clouds, architecture, growth of crops, manufacture of perfume, matrimony, domestic relations, gems, pearls, and rituals. The volume expounds on gemstone evaluation criterion found in the Garuda Purana, and elaborates on the sacred Nine Pearls from the same text. It contains 106 chapters and is known as the “Great Compilation“.

He was also an astrologer. He wrote on all the three main branches of Jyotisha Astrology:

His son Prithuyasas also contributed in the Vedic Astrology; his book “Hora Saara” is a famous book on Horoscopy. 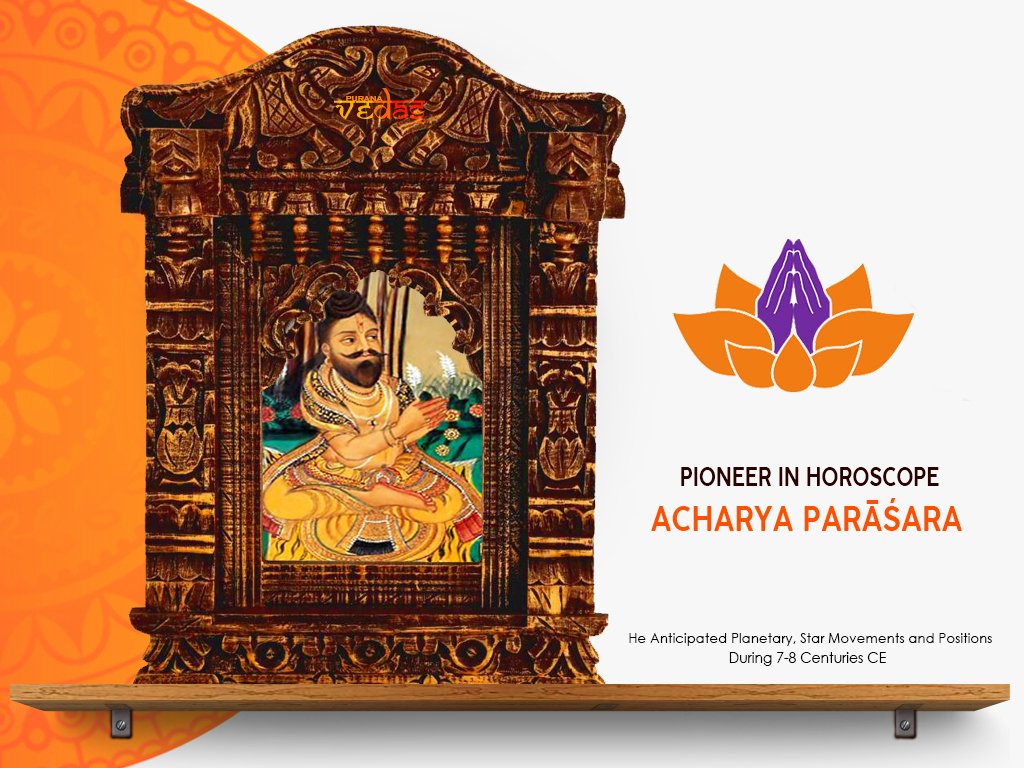 Acharya Parāśara was a maharishi and the author of many ancient Indian texts. He is accredited as the author of the first Purana, the Vishnu Purana, before his son Vyasa wrote it in its present form. He was the grandson of Vasishtha, the son of Śakti Maharṣi, and the father of Vyasa.

The Bṛhat Parāśara Horā Śāstra is concerned with the predictive branch of Horā, used, for example, to determine the appropriate and most auspicious times for various events and ceremonies (I.E. depending on the Anticipated Planetary And Star Movements And Positions. It was written the Purva-Khanda of what was to become known as the Brihat Parashara Hora Shastra, ascribed to Parasa. It is deeply indebted to the Brhajjataka of Varahamihira; it has also borrowed two verses from “SPHUJIDHVAJA” and its existence is presupposed by the author of the Uttara-Khanda.

Bṛhat Parāśara Horāśāstra is considered a foundational text of astrology. The Sanskrit in which it is composed dates to the 7th or 8th centuries CE. The Brihat Parashara Hora Shastra is the most comprehensive extant Śāstra (‘Book’ Or ‘Manual’) on Vedic Natal Astrology, in particular the Horā branch (Predictive Astrology, e.g. Horoscopes). Ascribed to Maharṣi Parāśara, the most popular version of the Bṛhat Parāśara Horāśāstra consists of 97 chapters a total of over 2,000 verses dealing with Natal Astrology. Other famous Classical Jyothish Works, Including “SARAVALI”, “JATAKA”, “PRAJIJATA” and “PHALADIPIKA”  are elaborations of the Parashari System, which is the form of Jyothish that is most widely practice today. 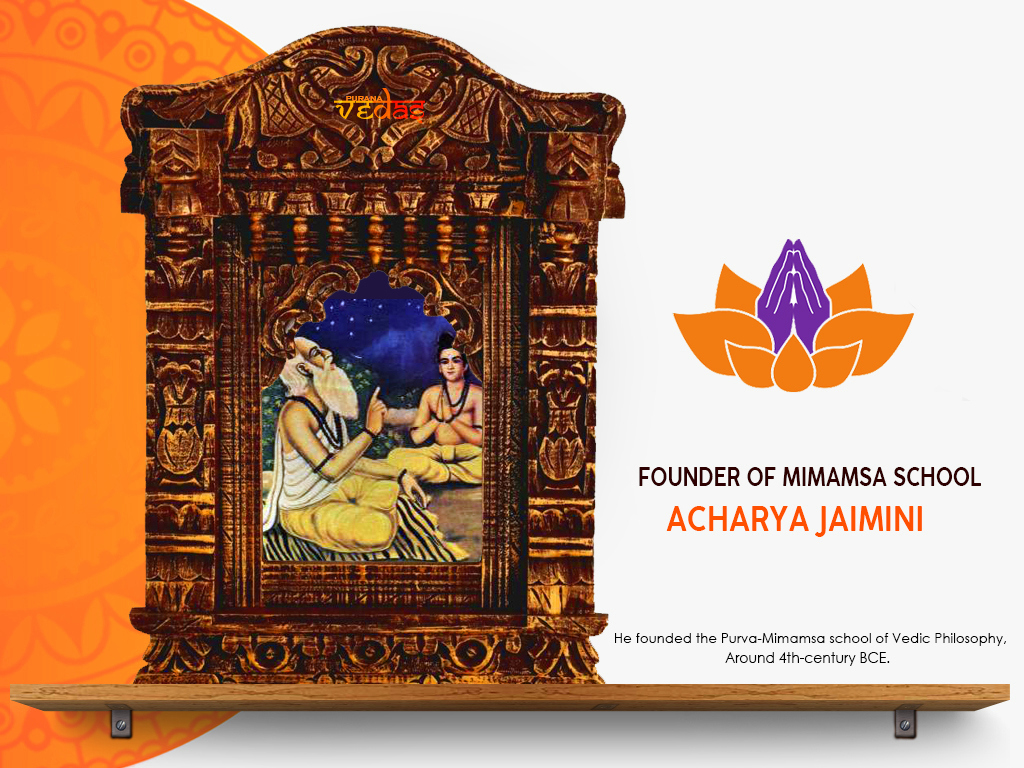 Acharya Jaimini was an ancient Indian scholar who founded the Mīmāṃsā school of Hindu philosophy. Maharshi Jaimini was a disciple of sage Veda Vyasa. Traditionally attributed to be the author of the Mimamsa Sutras and Jaimini Sutras, he is estimated to have lived around the 4th-century BCE. His school is considered non-theistic, but one that emphasized rituals parts of the Vedas as essential to Dharma.

Jaimini Sutras, arranged in four chapters, cover Karakamsa, Arudha, Upapada And Navamsa in the first chapter; Longevity, Diseases, Profession, Progeny and Spouse, in the second; Longevity, Nature and cause of death, in the third; and in the fourth chapter it covers the account of pre-natal epoch. The Jaimini System of prognostication is distinctly different from the Parashara System, the basic differences being with regard to Rasi aspects, determination of Karakas, Badhaka Bhavas and the Dashas. In Jaimini System, aspect has been assigned to the Rasis or signs which are synonymous with Bhavas or Houses, the Karakas are fixed according to longitudes gained by planets in particular signs, the Dashas are assigned to signs, and the method of determination of Badhakas is far more complicated, and its prediction-method based on Padas is also different.

Fundamental Principles of Jaimini Jyotish seems to have been adopted from Prashara System, Jaimini Jyotish so developed these that they now little resemble the system which may have been their source. Jaimini Jyotish is also filed with interpretational Principles which appear nowhere in Prarashara’s Work. It explains the abstruteness of the Jaimini System particularly when a number of Dashas are mentioned and the reader, clueless, is left to guess for himself. Jaimini developed almost a new system which did not prove popular because principles presented in the shape of sutras are always capable of a variety of interpretations;

Vedic Astronomy or Jyotisha  is the traditional Vedas system of astrology