Ancient Vedic Life Science was called as “AYUR VEDA”, the word “Āyurveda”, is derived from the term ‘AYUH’ meaning life and ‘VEDA’ meaning to Knowledge. Thus Ayurveda is the science of knowing the means through which life can be protracted. Ayurveda is an UPANGA or Arm of the ATHARVA VEDA and was raised to the level of a VEDA to give the science of medicine its significance and purity. In Vedic Roots It’s Science of Medicine too must be descended from the Divine Revelation to ancient Rishis or Sages of “PRAJAPATI”, from Prajapati to Ashwini Kumars, from them to Indra to Bharadwaj, from him to Atreya, and to his disciples Agnivesha, Khela, Harita and others. Over a period of time it got divided into two Schools of thought.

In “Bharadwaj Parampara” (Bharadwaj Rishi/Sage Followers): Kaya-Chikitsa (Medicine/Bodily treatment) is given prime importance. The famous text of this school of thought is “CHARAKA SAMHITA”, named after the famous physician, “CHARAKA”.

In “Dhanvantari Parampara” (Dhanvantari Rishi/Sage Followers): Saly-Chikitsa (Surgery) also had been dealt with. In the line of surgery SUSHRUTA is considered to be an authority and the famous treatise is SUSHTRUTA SAMHITA, written by him. Acharya Charak has been crowned as the Father of Medicine in 200 B.C. His Renowned work, the “CHARAK SAMHITA”, is considered as an index of “AYUR VEDA”. His Treatment, Diagnoses, and cures retain their strength and truth even after a couple of millennia. When the Science of “ANATOMY” was confused with different theories in Europe Acharya Charak revealed through his innate genius and enquiries the facts on Human Anatomy, Embryology, Pharmacology, Blood Circulation and Diseases like Diabetes, Tuberculosis, Heart Disease, etc.

In the “Charak Samhita” he has described the medicinal qualities and functions of 100,000 herbal plants. He has emphasized the influence of diet and activity on Mind and Body. According to Charaka’s translations health and disease are not predetermined and life may be prolonged by human effort and attention to lifestyle. As per Vedic heritage and science of Ayur Vedic system, prevention of all types of diseases have a more prominent place than treatment, including restructuring of life style to align with the course of nature and four seasons, which will guarantee complete wellness.

Charaka knew the fundamentals of “Genetics”. For instance, he knew the factors determining the sex of a child. A Genetic defect in a child, like Lameness or Blindness, he said, was not due to any defect in the mother or the father, but in the ovum or sperm of the parents (an accepted fact today).

Charaka studied the “Anatomy” of the human body and various Organs. He gave 360 as the total number of Bones, including teeth, present in the body. He wrongly believed that the heart had one cavity, but he was right when he considered it to be a controlling centre. He claimed that the heart was connected to the entire body through 13 main channels. Apart from these channels, there were countless other ones of varying sizes which supplied not only nutrients to various tissues but also provided passage to waste products. He also claimed that any obstruction in the main channels led to a disease or deformity in the body.

Under the guidance of the ancient physician Atreya, Agnivesa had written an encyclopedic treatise in the eighth century B.C. However, it was only when Charaka revised this treatise that it gained popularity and came to be known as Charakasamhita. For two millennia it remained a standard work on the subject and was translated into many foreign languages, including Arabic and Latin. Acharya Sushrut was an Ancient “Ayur Vedic” Physician and Surgeon in c.a 600 BCE, widely regarded as the “Father of Surgery”. He wrote the groundbreaking work, The “SUŚRUTA-SAṃHITĀ” which is one of the chief existing ancient Vedic treatises on medicine in the ancient world and is considered a foundational text of Ayurveda. His contribution revolutionized ancient medicine, is yet another landmark Indian contribution to ancient science

Acharya Sushruta glowingly recognized in the annals of Medical Science. Born to sage Vishwamitra, Acharya Sudhrut details the first ever Surgery procedures in “Sushrut Samhita,” a unique Encyclopedia of Surgery. He is venerated as the father of plastic surgery and the “Science of Anesthesia”. When surgery was in its infancy in Europe,

Sushrut was performing Rhinoplasty (Restoration of a Damaged Nose) and other challenging operations. In the “Sushrut Samhita,” he prescribes treatment for Twelve Types of Fractures and Six Types of Dislocations. His details on human embryology are simply amazing. Sushrut used 125 Types of Surgical Instruments including “Scalpels”, “Lancets, “Needles, Sushruta was the Father of Surgery. He describes a lot of Surgical Instruments. On the basis of his description, model instruments were created. They are displayed in “London Exhibition”. Sushruta describes Rhinoplasty – Fixing Artificial Nose. Acharya Patañjali was a sage in India, thought to be the author of a number of Sanskrit works. The greatest of these are the Yoga Sutras. Maharshi Patañjali dated it as 2nd century BCE during the Maurya Empire (322–185 BCE). Maas estimates Patañjali’s Yogasutra’s date to be about 400 CE, based on tracing the commentaries on it published in the first millennium CE. “Most scholars date the text shortly after the turn of the Common Era (circa first to second century), but that it has been placed as early as several centuries before that.” Some theories stated that Maharshi Patanjali was born in Kodar village of Vajirganj area at Gonda district Uttar Pradesh about 5,000 years ago. Most of the Paintings and theories clarifies that Patanjali Maharshi Jeeva Samadhi is believed to be in Tirupattur Brahmapureswara Temple.

The word Yoga comes from the word Yuj which literally means Union. The Actual Meaning of Yoga is The Union of a human Being with the Divine. It Simples the Unification of our soul with the Divine Cosmic Universal Soul, It is Union of The Energy Within us with the Cosmic Energy.

The Yoga Sūtras of Patañjali are a collection of 196 Sanskrit sutras (APHORISMS) on the theory and practice of yoga. The Yoga Sutras were compiled prior to 400 CE by the sage Patanjali in India who synthesized and organized knowledge about yoga from much older traditions. The Yoga Sūtras of Patañjali was the most translated ancient Indian text in the medieval era, having been translated into about forty Indian languages and two non-Indian languages: Old Javanese and Arabic. The text fell into relative obscurity for nearly 700 years from the 12th to 19th century. Acharya Parashara (Parāśara) was a Maharishi and the author of many Ancient Vedic texts. Parasara had even explained the phenomenon of the Photosynthesis (process of self nourishment in the plants) in the fourth chapter (Vriksha sharira Dharma sastram) of the same book. Vriksha Ayurveda explains on the Biodiversity Perspective, Agronomic Aspects, and Ailments reveal the broad agricultural knowledge base that existed in India centuries ago.

In the year 1665 AD, Robert Hook, a botanist with the help of his microscope, explained to the world about the Plant cell and its structure. One thousand and six hundred years ago prior to that date, sage Parasara in 1st century AD had clearly explained the structure of a Plant cell in the Sanskrit work “Vriksha Ayurveda“.

Parasha Maharshi is the author of the VṛKṣĀYURVEDA (“The Science Of Life Of Trees“), one of the earliest texts on botany. This text was considered to be an ancient botany primer for students of Traditional Indian Medicine. Krishi parasaram, a book that dealt with agriculture and weeds. 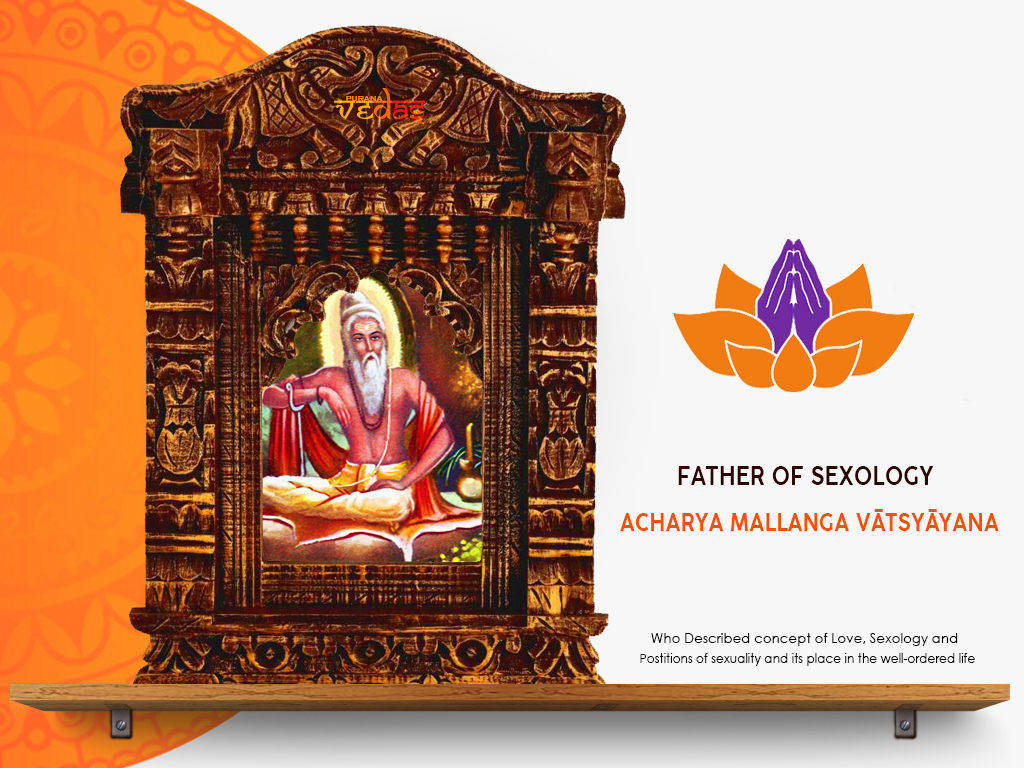 ‘Acharya Mallanga Vatsyayan‘ is the Gautra name of Maharishi Mallanga. Which name is more popular In the Panchatantra, he is referred to as ‘VAIDYAKASASTRIJANA‘. Vatsyanan Mallanga Written KĀMASŪTRA is an ancient Indian Sanskrit text on sexuality, eroticism and emotional fulfillment in life. Apart from Kamasutra, Vatsyayan’s second contribution is in the Nyayadarshana. He tried to penetrate the Vaishyasika. After Vatsyayan, this tradition of accepting the authority of Vaishyasks also came into the notice. Gradually, ‘Nyaya-Vaiseshika’ became an integral philosophy. He lived in India during the second or third century CE, probably in Pataliputra (modern day Patna).

Maharishi Vatsyayan, was actually Brahmachari. Vātsyāyana, although it is believed that his disciples went on his instructions, on the request of the Ancient Kings in the Himalayan range to influence the hill tribals to give up the pagan cult of sacrifices. He is said to have created the legend of Tara among the hill tribes as a tantric goddess. Later as the worship spread to the east Garo hills, the goddess manifest of a ”YONI” Female Genitalia (Vulva) goddess “KAMAKHYA” was created. His interest in human sexual behavior as a medium of attaining spirituality was recorded in his treatise Kama Sutra.

Maharishi Vatsyayana has divided the Kamasutra into seven tribunals, which are in the form of General, Communal, Kanyasampraya, Bharyadhikaran, Pardarik, Vaishik and Aupanishadic respectively. According to Hindu mythological texts, Nandi first composed a thousand chapters of Kamshastra, which was later presented in briefs by the scholars Udalaliki Shvetketu and Bababharya Panchala respectively.

Vedic tradition has the concept of the Purusharthas which outlines “Four Main Goals Of Life“. DHARMA (Righteousness, Moral Values), ARTHA (Prosperity, Economic Values), KAMA (Pleasure, Love, Psychological Values) and MOKSHA (Liberation, Spiritual Values) It holds that every human being has four proper goals that are necessary and sufficient for a fulfilling and happy life.