In ancient Vedas Chemistry was called as “Rasayan Shastra”, ‘Science of liquids (Chemical)’ was called as Rasa-Vidya, Rasatantra and Rasakriya. Vedas Mentioned about chemical laboratories and chemicals works, which were called “Rasakriya-Nagaram” and “Rasakriya-Shala” which means ‘School where Chemical are activated’. A chemist was referred to as a Rasadnya and Rasa-tantra-vid which literally mean ‘Person having knowledge about Chemicals’. Away from each other the word “RASA” which means Chemical, another word, “DRAVYA” which means Slurry/Liquid, was also used words related to chemicals.

RASĀYANA, In Sanskrit रसायन, with the exact meaning: The word ‘RASAYANA‘ is composed of two words i.e. Rasa and Ayana. ‘Rasa‘ means fluid or juice and ‘Ayana‘ means Pathway. Hence the word ‘Rasayana‘ means ‘Path of the Juice’. It also means by which one gets the excellence of Rasa is known as Rasayana. Literally the technical term Rasayana refers to the means of obtaining the optimum nourishment to the Dhatus.

Chemists opine that all these metals can only be obtained by composite of chemical processes: each of these metals has different physical and chemical characteristics and need special types of extraction processes to get them out of their ores. No surplus information on the ore can give such names for the metals unless they were produced. Moreover, of the Six Major Schools of thoughts, VAISESIKA, which extensively deals with matter and its composition, is much like modern chemistry . Much in the veins of the chemistry. Vaisesika classifies the matter or Substance (Dravya) consisting of 9 elements – Earth, (Prithvi), Water, (Apah), Fire (Tejas), Air (Vayu), Ether (Aakaash), Time (Kala), Space (Dish), Self (Aatman), and Mind (Maanas). The substance with its nine elements is part of what is called Padaartha.

There are many Vedas Literatures which comment on Chemistry in Ancient Vedic Era:

Post Vedic Period was the boom age of Indian Chemistry. Various schools of philosophy, mainly Samkhya, Brhat Samhita, Arthasastra of Kautilya, Nyaya and Vaiseshika of Varahamihira and Ayurvedic texts like Charaka Samhita and Susruta Samhita provide a lot of evidence regarding the advanced practices of Ancient Vedic chemistry during this period. Acharya Nagarjuna was an extraordinary wizard of science born in the nondescript village of Baluka in MadhyaPradesh . His dedicated research for twelve years produced maiden discoveries and inventions in the faculties of chemistry and metallurgy. Textual masterpieces like ”RAS RATNAKAR”, “RASHRUDAYA” and “RASENDRAMANGAL” are his renowned contributions to the science of chemistry. Where the medieval alchemists of England failed,

Nagarjuna had discovered the alchemy of transmuting base metals into gold. As the author of medical books like “Arogyamanjari” and “Yogasar,” he also made significant contributions to the field of curative medicine. Because of his profound scholarliness and versatile knowledge, he was appointed as Chancellor of the famous University of Nalanda . Nagarjuna’s milestone discoveries impress and astonish the scientists of today.

Historically, “Rasa Shastra” or ‘Vedic Chemistry’ is an offshoot of Ayurveda that was developed around the period, when Nagarjuna existed, i.e. more than 2500 years ago. Derived from Sanskrit, RASA has several meaning attached to it – “Rasyate Aaswadyate iti Rasa” which stands for taste, “Rasati Shariire Aasu Prsarati it Rasa” meaning juice, “Rasati Aharahargachhati iti Rasa” that stands for the first material formed after digestion or liquids, under the transportation system of the body like plasma, chyle or lymph and “Rasanaat Sarva dhatuunam Rasaityabhdhiiyate” is for material which is capable of lick and digest all metals. Rasa Shastra essentially describes the use of metals, gems, minerals and poisons, to produce special formulations, which helps in combating acute conditions or serious diseases. Ancient Vedic Chemistry texts had revealed various chemical processes that happen within the human body, centuries before birth of Christ. Kautilya’s Artha Shastra had reference of availability of various metallic ores at various places, the methods of purification, the utility of various metals & alloys, layouts of chemical laboratories (Rasasalas). The gold plating of copper also has a special mention in this book. In books of Sanskrit, Telugu, Tamil & Marathi, we find the preparation of gunpowder and fireworks. The Sanskrit references of Gunpoder can be found in Sukra Niti I& Rasa-Upanishad. In Rigveda we find the mention of cotton dyeing & leather tanning and the chemicals used in the processes. 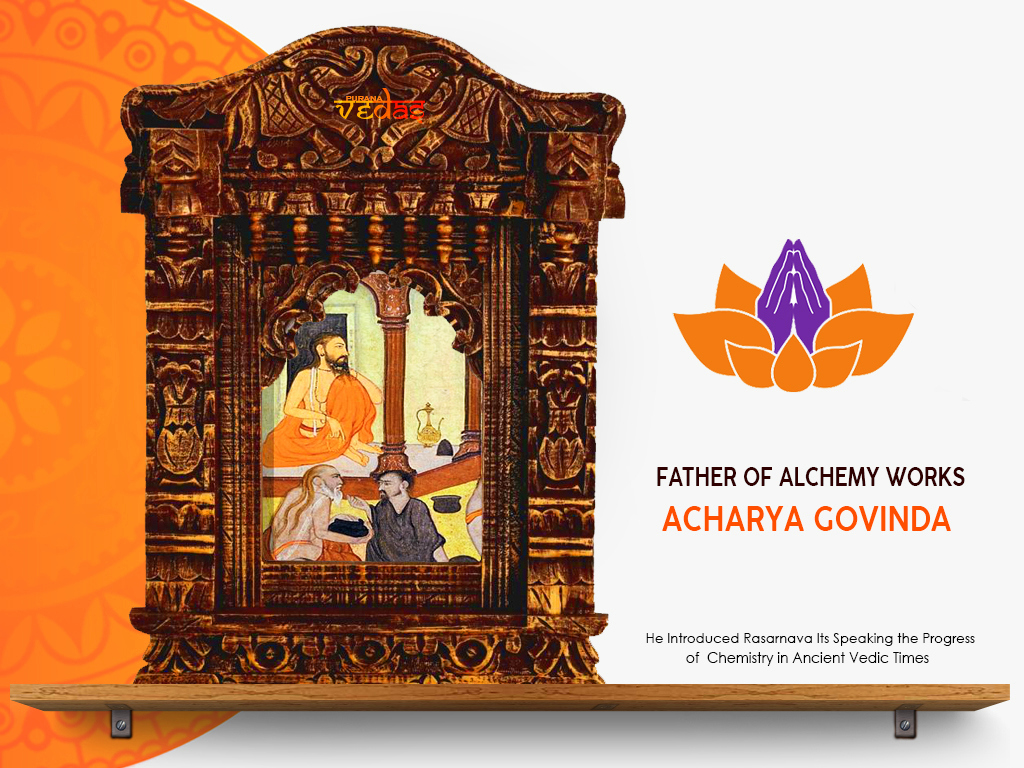 Acharya Govinda is Vedic Chemistry Scholar. RASARNAVA is written by him, its oldest Rasa Tantra text, narrated as series of dialogues between Bhairava and Devi. He mentioned Killing or destroying metals the method of destroying the qualities of metal in order to make it worthy of use, has also been described in ancient Vedic texts. It was a common practice to destroy the metal in the laboratory. Sulphur was used to destroy all metals. Hence, in the book, sulphur has been compared to a lion and the other metals to an elephant.

Coversion of zinc into gold: We all know that if one part of zinc is mixed with three parts of copper and heated, it changes into brass, which is a golden coloured mixture.

The non-rusting ability of metals: Govindacharya has described, the sequence of the abilities of metals to fight rusting and corrosion. Even today, the same system is followed-

This means that the sequence of the metals staying unaffected and undecayed by rusting or corrosion is gold, silver, copper, brass, lead and iron. Of these, gold rusts the least.

When copper is mixed with sulphuric acid, we get Copper Sulphate. Various ashes—When the harmful characteristics of a metal are removed by chemical action and the metal is converted to ashes, it is known as bhasma. The ash of iron (lauh bhasma), gold (suvarna bhasma), silver (rajat bhasma), copper (tamra bhasma), tin (vanga bhasma) and lead (sees bhasma) are primarily used for medicinal purposes. 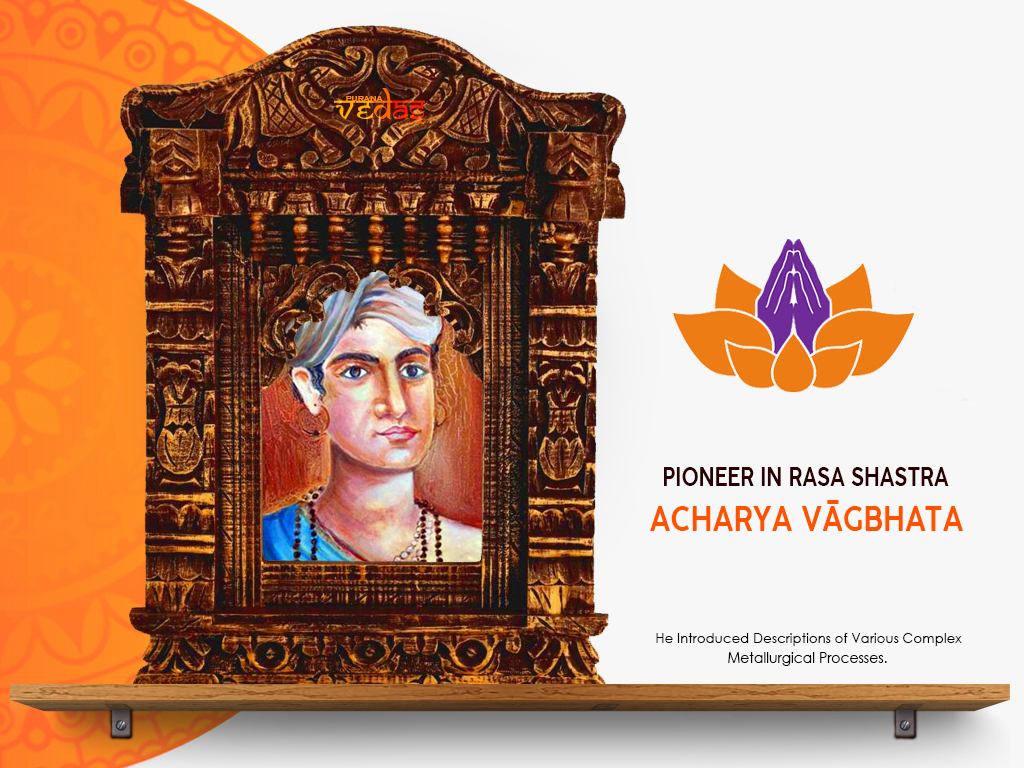 Acharya Vāgbhata is one of the most influential classical writers of Rasa Shastra. Several works are associated with his name as author, principally the RASARATNASAMUCCAYA, an Iatrochemical work, is credited to Vāgbhaṭa, though this must be a much later author with the same name Ashtāṅgasaṅgraha, and the Ashtāngahridayasaṃhitā. Both works make frequent reference to the earlier classical works, the Charaka Samhita and the Sushruta Samhita.

Rasaratna Samuccaya contains detailed descriptions of various complex metallurgical processes, as well as descriptions of how to set up and equip a laboratory and other topics concerning Vedic alchemy. It is a work that synthesizes the writings and opinions of several earlier authors and presents a coherent account of medieval Indian alchemy.