Despite developing quite independently of Babylonian mathematics, some very superior mathematical discoveries were made at a very early time in India. Mantras from the early Vedic Period (Before 1000 BCE) invoke powers of ten from a hundred all the way up to a trillion, and provide evidence of the use of Arithmetic Operations such as “Addition, Subtraction, Multiplication, Fractions, Squares, Cubes and Roots”. At the age of 23” He formulated the process of calculating the motion of planets and the time of eclipses. Aryabhatt was the first to proclaim that the earth is round, it rotates on its axis, orbits the sun and is suspended in space – 1000 years before Copernicus published his heliocentric theory. He is also acknowledged for calculating π (Pi) to four decimal places: 3.1416 and the sine table in trigonometry. Centuries later, in 825 CE, the Persian mathematician, Mohammed Ibna Musa credited the value of π (Pi) to the Indians, “THIS VALUE HAS BEEN GIVEN BY THE INDIANS.” And above all, his most spectacular contribution was the concept of zero without which modern computer technology would have been non-existent. Aryabhatt was a colossus in the field of mathematics.

However, Aryabhata did not use the Brahmi numerals. Continuing the Sanskritic tradition from Vedic times, he used letters of the alphabet to denote numbers, expressing quantities, such as the table of sines in a mnemonic form. A Buddhistic text called “LALITA VISTARA” (1st century BC) describes upto 10 raised to 53 and called that numerical value as “Talakshna”. Another Jain text (anuyogadwara) describes numbers upto 10 raised to the power of 140. During the ancient periods, Greeks gave the biggest numerical value called Myriad, which is equal to 10 raised to the power of 4, i.e. 10000 only. Biggest Roman Numerical were 10 raised to 3 i.e. 1000 only. It was called as “Milli“. The numbers from zero to nine were first adopted by Arabs from India and had spread to Europe.

Aryabhata worked on the approximation for pi (π), and may have come to the conclusion that π is irrational. In the second part of the Aryabhatiyam (gaṇitapāda 10), he writes:

It is speculated that Aryabhata used the word āsanna (approaching), to mean that not only is this an approximation but that the value is incommensurable (or irrational). If this is correct, it is quite a sophisticated insight, because the irrationality of pi was proved in Europe only in 1761 by Lambert.

that translates to: “for a triangle, the result of a perpendicular with the half-side is the area.”

Aryabhata discussed the concept of sine in his work by the name of Ardha-Jya. Literally, it means “half-chord”. For simplicity, people started calling it jya. When Arabic writers translated his works from Sanskrit into Arabic, they referred it as jiba. However, in Arabic writings, vowels are omitted, and it was abbreviated as jb. Later writers substituted it with jaib, meaning “pocket” or “fold (in a garment)”. (In Arabic, jiba is a meaningless word.) Later in the 12th century, when Gherardo of Cremona translated these writings from Arabic into Latin, he replaced the Arabic jaib with its Latin counterpart, sinus, which means “cove” or “bay”. And after that, the sinus became sine in English. 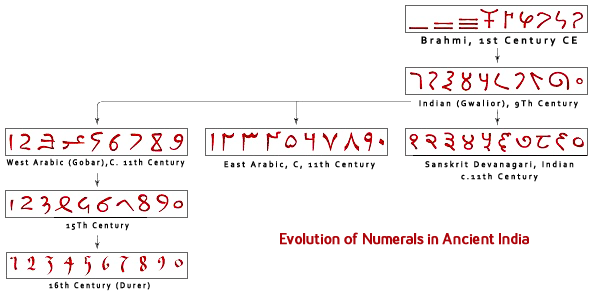 Acharya Brahmaguptha was a 7th Century Indian mathematician and astronomer. He is the author of three early wrote some important works on both mathematics and astronomy. Brahmagupta was born c. 598 CE, Died c. 668 CE, He lived in the state of Rajasthan of northwest India (he is often referred to as Bhillamalacarya, the Professor from Bhillamala), and later became the Dean of the astronomical observatory at Ujjain in central India. He lived in Bhillamala (modern Bhinmal) during the reign of the Chavda dynasty ruler.

The Great Written “BRĀHMASPHUTASIDDHĀNTA” is the main work of Brahmagupta, written c. 628. Τhis text of mathematical astronomy contains significant mathematical content, including a good understanding of the role of zero, rules for manipulating both negative and positive numbers, a method for computing square roots, methods of solving linear and quadratic equations, and rules for summing series, Brahmagupta’s identity, and Brahmagupta’s theorem. Brahmagupta explained how to find the cube and cube-root of an integer and gave rules facilitating the computation of squares and square roots. He also gave rules for dealing with five types of combinations of fractions. He gave the sum of the squares of the first n natural numbers as n(n + 1)(2n + 1)⁄ 6 and the sum of the cubes of the first n natural numbers as (n(n + 1)⁄2)².

Brāhmasphuṭasiddhānta Rules for Numbers – Treat Zero as a Number

Brāhmasphuṭasiddhānta is one of the first books to provide concrete ideas on positive numbers, negative numbers, and zero. He wrote the following rules:

The last two of these rules are notable as the earliest attempt to define division by zero, even though they are not compatible with modern number theory (division by zero is undefined for a field). Acharya Āryabhata II (c. 920 – c. 1000) was an Indian mathematician and astronomer, and the author of the “Maha-Siddhanta” or “Āryasiddhānta”. The numeral II is given to him to distinguish him from the earlier and more influential Āryabhaṭa I.

The Mahāsiddhānta or Āryasiddhānta is an astronomical collection based on the traditional practice of Smṛtis (Transit from Vedic literature). The Most Eminent treatise written in Sanskrit consists of 18 Eighteen chapters and 625 Ślokas (verses). The first 12 chapters deal with chapters deals with topics related to mathematical astronomy and covers the topics that Indian mathematicians of that period had already worked on , Detailed derivations are presented on topics such as the mean and true longitudes of the planets, eclipses of the Sun and the Moon, the projections of eclipses, the lunar crescent, and the heliacal rising and settings of planets, including some calculations on conjunctions of planets as well as planets with stars.

The next six chapters of the Mahāsiddhānta form a separate section called the Golādhyāya (On the sphere) includes topics such as geometry, geography and algebra, which were applied to calculate the longitudes of the planets. In about twenty verses in the treatise, he gives elaborate rules to solve the indeterminate equation: by = ax + c. These rules have been applied to a number of different cases such as when c has a positive value, when c has a negative value, when the number of the quotients is an even number, when this number of quotients is an odd number, etc. In Chapter 17, for example, shortcuts are provided for determining the mean longitudes of the planets. In Chapter 18, under the section called Kuṭṭakādhyāya, Āryabhaṭa II discusses the topic of the solution of indeterminate equations of the first degree. He improves upon earlier methods and suggests a shorter procedure. In his work, Āryabhaṭa II also touches upon several arithmetical operations such as the four fundamental operations, operations with zero, extraction of square and cube roots, the rule of three, and fractions. To represent numbers, he adopts the famous Kaṭapayādi system of letter numerals. This practice does not conform to the method followed by some of his predecessors, who used the well‐known Bhūta Saṃkhyā system of word numerals. The text does not say anything about the year and place of Āryabhaṭa II’s birth, nor does it give any other personal information. In recent years several scholars have tried to establish an approximate period in which he lived based on the cross‐references to his work made by other contemporary and younger scholars. D. Pingee believed that Āryabhaṭa II’s treatise was written between 950 and 1100. Acharya Bhaskara – I  was a Indian astronomer and mathematician who was the first to write numbers in the decimal system with a circle for the zero and who gave a exclusive and outstanding rational approximation of the Sine function in his commentary on Aryabhata’s work. He lived in c. 629, Possibly Valabhi, Near Modern Bhavnagar, Saurashtra, India.

Bhaskara-I’s perhaps most important mathematical role concerns the representation of numbers in a positional system. His fame rests on three treatises he composed on the works of “ARYABHATA”. Two of these treatises, known today as “MAHABHASKARIYA” (“Great Book of Bhaskara”) and “LAGHUBHASKARIYA” (“Small Book of Bhaskara”), are astronomical works in verse, while “ARYABHATIYABHASHY”A (629) is a prose commentary on the Aryabhatiya of Aryabhata.  Bhaskara particularly stressed the importance of proving mathematical rules rather than just relying on tradition or expediency. In supporting Aryabhata’s approximation to π, Bhaskara criticized the traditional use of Square root of√10 for it (common among Jain mathematicians). Acharya Bhaskara II, also called BHĀSKARĀCĀRYA or BHASKARA was Born C.1114 in a Deshastha Rigvedi Brahmin family near Vijjadavida (believed to be Bijjaragi of Vijayapur in modern Karnataka). He lived in the Sahyadri region (Patnadevi, in Jalgaon District, Maharashtra — Died c. 1185, Probably Ujjain), the leading mathematician of the 12th century, He has been called the greatest mathematician of medieval India.

Many of his books transliterated in several languages of the world bear testimony to its eminence. In his treatise “Siddhant Shiromani” he writes on planetary positions, eclipses, cosmography, mathematical techniques and astronomical equipment. In the “Surya Siddhant” he makes a note on the force of gravity:

“Objects fall on earth due to a force of attraction by the earth. Therefore, the earth, planets, constellations, moon, and sun are held in orbit due to this attraction.”

Bhaskaracharya was the first to discover gravity, 500 years before Sir Isaac Newton. He was the champion among mathematicians of ancient and medieval India. His works fired the imagination of Persian and European scholars, who through research on his works earned fame and popularity.

Vedic Mathematics is a mathematical techniques retrieved from the Vedas