Management has become a part and parcel in everyday life, let it be it home, office, factory, Society and Government, or in any other organization where a group of human beings assemble for a common purpose, management principles come into play through their various facets like management of time, resources, personnel, materials, machinery, finance, planning, priorities, policies and practice.

The term “MANAGEMENT” derived from MAN·AGE MENT which has been used in different senses.

Managers and employers considered collectively, especially the directors and executives of a business or organization.

The act of handling or controlling something successfully

The skillful handling or use of something such as resources

Vedic Management means management through Veda- management through knowledge (VEDAS) and its infinite organizing power- management that is supported by the holistic value of Natural law and the innumerable specific value of Natural law- all the laws of nature discovered by the objective approach of modern science and through subjective approach of Vedic science- it is in full accord with all the knowledge of the Laws of Nature that are known to Chemistry, Physiology, psychology, Physics etc.

The modern management concepts like vision, leadership, motivation, excellence in work, achieving goals, meaning of work, attitude towards work, nature of individual, decision making, planning etc., are all discussed in the VEDAS with a sharp insight and finest analysis to drive through our confused grey matter making it highly eligible to become a part of the modern management syllabus. Acharya Vidura is one of the mythological characters in the Ancient India; He was born in Kuru Dynasty of Hastinapur.  He is described as the prime minister of the Kuru Kingdom and mentioned as Oldest Management Guru.

Vidura Neeti (Vedic Management) Essence from Vidura for Organizational Management, It’s not just an epic which contains information on various historical and philosophical incidents. It’s an insight into all the Vedas, Vedanta Sahithya and the Puranas put together. It’s a classic work on war sciences, diplomacy. More than anything else it is a name of text book of management from where greatest books of management have taken cues to be formed.

The Vidura Neeti is a treatise on understanding how to manage the enterprises in a novel way of flawless communication, ethical interpretation of opportunities, customer satisfaction and very importantly managing the various resources, these things though are taught now in modern B-schools. They are not 100 % success oriented and hence their applications also are a big question mark given their low success rate. But the modern day Chanakya Neeti is a sequel to Vidura Neeti that was given as a valuable piece of advice to the blind king Dhritarashtra by his minister Vidura. Acharya Cāṇakya was an ancient Indian Management Guru, Philosopher, Economist, Jurist and Royal Advisor. He is traditionally identified as KAUṭILYA or VISHNUGUPTA. The Arthashastra (4th Century B.C) is treatise on political economy which was written by Kautilya in the ancient India, This Book dated to roughly between the 2nd century BCE and the 3rd century CE As such, he is considered the pioneer of the field of political science, management and economics in India, and his work is thought of as an important precursor to classical economics.

Management is an interdisciplinary field with contributions from various fields such as psychology, social psychology, sociology, anthropology, political science, economics and finance. Contemporary management also includes issues related to cross-cultural management and international management. Increasingly the understanding of management is coming to depend on understanding, analyzing and predicting organizational behavior, which is the basis for human resource management. One of the keys to successful management is the ability to understand and apply management principles and techniques efficiently and effectively. Managers must develop an in-depth knowledge of past and present models, theories and processes to manage effectively and intelligently. Contemporary management practice is pervasive in every aspect of human life within all types of organizations.

The above five Sutras (aphorisms) although written in a different context, a careful analysis and interpretation reveals basic lessons in foundations of management. In these sutras, Kautilya analyses the entire management issues in following ways and lets look at it from the contemporary organizational management:

Dharma without wealth according to Kautilya is toothless (Dharmasya Mulam Artha), and wealth without dharma is useless because a poor person cannot support the entire society. Indian culture has always emphasized that Sukhasya Mulam Dharma and Dharmasya Mulam Artha taken together – namely wealth does not lead to directly happiness. Happiness for self and others results through ethical behavior: wealth or resources make ethical behavior possible. This also means that one must strive to generate wealth – resources, money – share it equitably to create happiness for oneself and others. Such generation of wealth must also be through ethical means, which alone would lead to overall happiness.

Kautilya further stated to generate wealth you require an enterprise or an organization or an asset (Arthasya Mulam Rajyam). He then stated the support for organization is the organs (Rajyasya Mulam Indriyajayah), the functions, processes, activities, etc. The victory over organs of the body, which is the literal meaning of the word INDIYAJAYAH, is a well-known concept in the Indian culture and this refers to the control over the five organ of sense (Eyes, Ears, Tongue, Nose, And Skin), an on five organs of action (Hands, Feet, Mouth, Genitals, And Anus). Conquering the body organs are manifested through control over the six enemies of the mind – Desires (Kama), Anger (Krodha), Greed (Lobha), Arrogance (Mada), Infatuation (Moha), Envy (Matsara). Only the governor or CEO who has conquered the organs of his body would be able to put the goals of the organization first, especially when in conflict with self-interest. 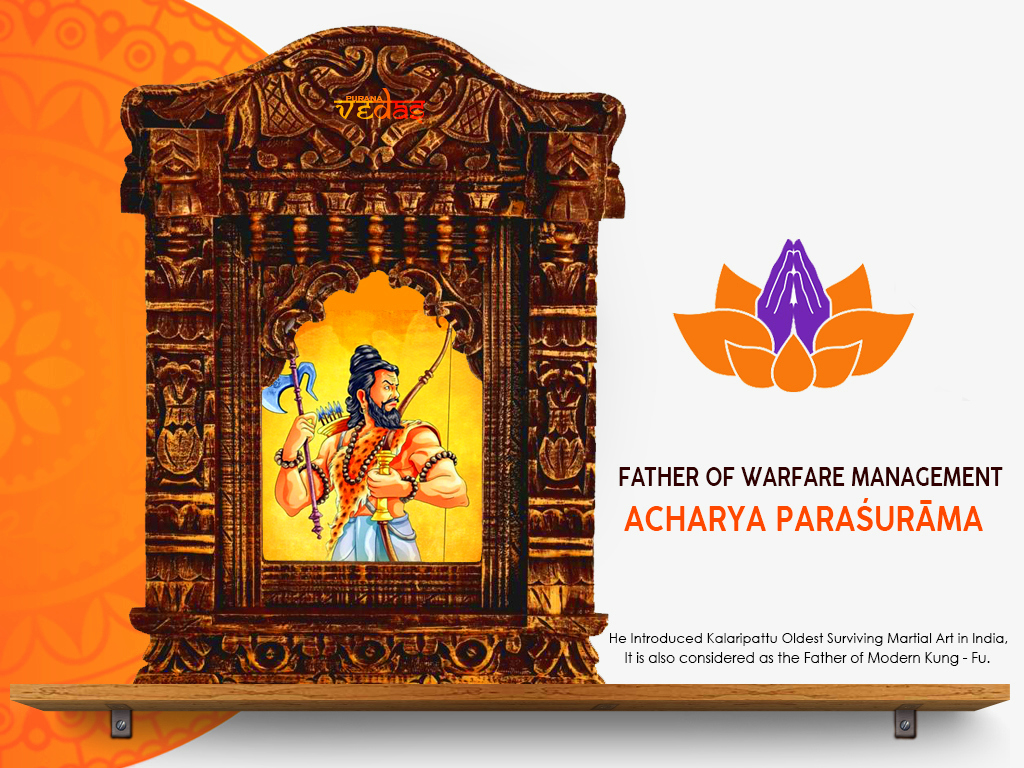 Acharya Paraśurāma was born to a Brahmin sage Jamadagni and his Kshatriya wife Renuka, living in a hut. His birthplace is believed to be on top of the Janapav hills in Indore, Madhya Pradesh. The abbey (ashram) is known as Jamadagni Ashram, named after his father. The place also has a kund (pond) that is being developed by the state government.

Maharshi Paraśurāma carried traits of a Kshatriya and is often regarded as a Brahman Warrior, He carried a number of traits, which included aggression, warfare and valor.

Parashurama is revealed Dhanurveda in a composition of 6000 verses. Parashurama then transmitted it following a lineage of tradition (PARAMPARAYA) from Vasishtha to Vishvamitra, Drona, Bhoja, and the literary corpus (body) became quite diverse.

The word ‘DHANUṣ’ means weapons in general and the pair of bow and arrow in particular. Hence ‘DHANURVEDA’ means military science or the arts of archery, but the latter sense is more common. Another name commonly used is ‘DHANURVIDYĀ’. The Dhanurvidyā is exclusively concerned with archery. Dhanurveda is a Upveda Use of bows and arrows. Under this come archery or military arts & science. In other words, Dhanurveda is another name for Indian military science.

According to the scriptures there are four Vedas and similarly four Upvedas. The first of these upvades is Ayurveda . The second craft is the Veda. The third is Gandharva Veda and the fourth is Dhanurveda. All the mystery of archery is present in this archery. It is a different matter that now this archery is nowhere in its original form.

The science of Dhanurveda is quite ancient. No scientific work known as Dhanurveda is extant now. A work called Dhanurveda Samhitā available now, is considered to be of a much later date. The information about this science is also available in the following literature:

Weapons of war are generally classified into four groups:

Yantramukta – Used by a contrivance or machine. For e.g. Arrow

Muktāmukta – Used either by hand or by holding in hand. For e.g. Spear

Amukta – Used directly by the hands. For e.g. Sword

When an arrow is discharged with appropriate mantras, it would get transformed into very powerful missiles called ‘Astras’. Some of the famous Astras include: